It’s all getting a bit complex now so we will now simplify it again, and look at a system that was discovered many years ago whereby whole words could be made out of letters. We can see that numbers are the easiest way of organizing the information, but unfortunately, numbers in themselves are fairly abstract. So a system had to be found which would enable numbers to take on flesh and blood. This would have two advantages – the first would mean that you could create an infinite number of memory places without having to keep the images becoming more and more complex with patches and banks; the second was that you could retain dates, telephone numbers and other strings of complex digits.

The system is based around each number having a shape which relates to the shape of a letter, or rather the shape of the letter AND ANY OTHER PHONIC SOUND PRODUCED BY SIMILAR LETTERS OR COMBINATION OF LETTERS.

For example, ‘ f ‘ in fish is the same sound as ‘ ph ‘ in elephant. These are the letters, and the ways of remembering them

1 t,d – the vertical stroke down starts the letter, it is the sound produced with a flick of the tongue on the teeth

3 – m similar to n, in that there are 3 downstrokes

4 – r The last letter of the word four

5 – L When you look at your right-hand palm upwards and thumb out, it will form the letter L. It is also Roman for 50.

0 – S or Z, sch, sh. Z starts the word Zero, both s and z are formed with air escaping through a small hole formed by tongue and teeth.

Take some time learning these letters as they do take time, and it is worth getting right now.

All other letters including vowels and such letters as w, y etc are filler letters and do not stand for any number, but help in the formation of words. The first 10 numbers can be a bit tricky because of the words necessary, but then I will drop in a few of the higher numbers up to the number 100 as guide.

You will need to come up with the other words yourself. As it is the best way of learning and making any system personal to you. With this system it is comparatively easy to come up with a list up to 9999 long!
You need to break it down though.

Dominic O’Brien is a world memory champion, and he suggests using these letters in a quite remarkable way. Break the four-digit number into to parts, so you have to digits followed by two digits. The first two digits are represented by the kind of list that you have above, but the second two are famous movie stars, represented by their initials. So

Sean Connery is 07 (no relation to James Bond either!) If you had a number to remember, or wanted to place something at position 5907, then you would imagine that item in a Lab with the chemist as Sean Connery making some potion or other.

Of course, you don’t need to limit yourself to short 4 letter groupings. If you can manage to then any word can become a number, but it must be a touchable object or person. The word Dressing Gown, for example, would represent the number 1402772 … which looks suspiciously like a phone number! In which case, if your friend who is called Arthur has the number 1402772, you would imagine Arthur, holding a phone (so you knew what it was about) in a dressing gown. This demonstrates how you use different systems at different times and places, which I will discuss later on when I suggest some pointers as to how to remember some of those dates that you might have to learn in history!

The following pictures are suggestions only of words that could be used to encode numbers as pictures. I would not be so bold as to suggest that I had come up with them however! From research, I believe that the first person to use these words as part of a system was Harry Lorayne in the ‘50’s. It is important however to make the effort to come up with your OWN words, and the following have been provided only as a guide and with due respect to Harry. 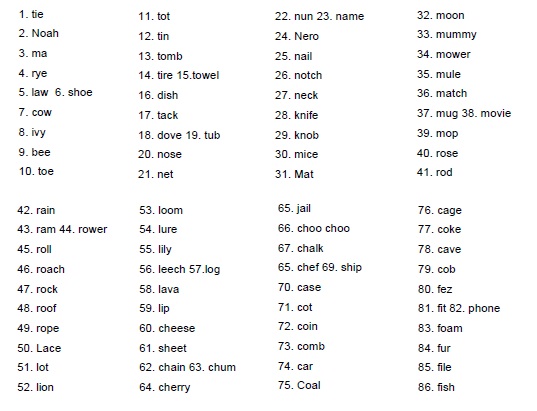