A number has a shape all of its own but needs a little interpretation. The graphics in this section will help you. 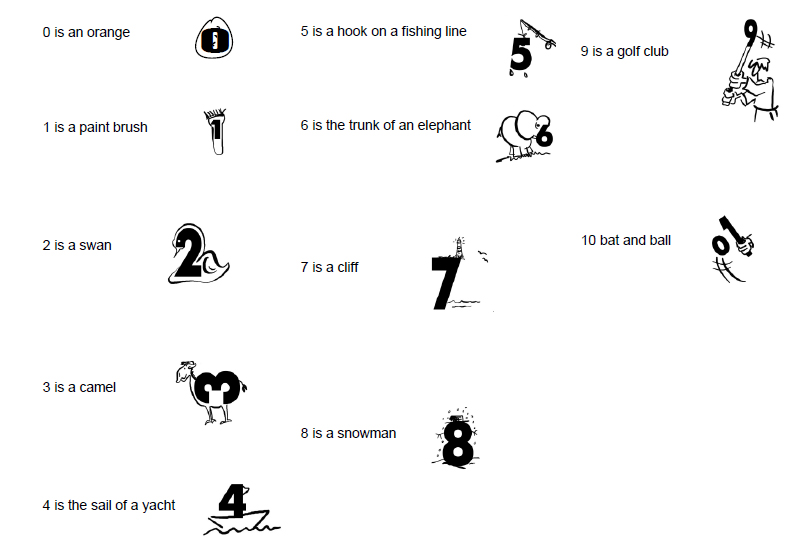 Using the guidelines for number rhymes, this time memorize a new list of 10 items, but this time link the pictures of the SHAPES system to the objects.

I.e. Link your first item with a paintbrush (for 1) the second with a swan, the third with a camel etc. So a car at position 5 might be imagining pulling a car from a river using a hook and line.

A bit clever this …. Firstly, you will need to decide which system you like best, rhymes or shapes. If it rhymes, then that is the BANK, and the shapes become the PATCH. Vice versa if you preference the other.

Lets assume that you prefer rhymes. 1-10 is the same as a simple list. 11 upwards you create COMBINATION IMAGES. Each image will always have a ‘bun’ in it, but the bun interacts with the 10 shapes lists. So for example number 11 would be a paintbrush painting a bun a color. Number 15 would be a bun on a fishing line. All the numbers from 11 to 19 are the shapes, but the bun means it is HAS A 1 AT THE FRONT. In the THIRD 10 (21-30) then each ‘shape’ will interact with a shoe! So number 28, would be a snowman wearing a pair of shoes. See the table over for further clarity. 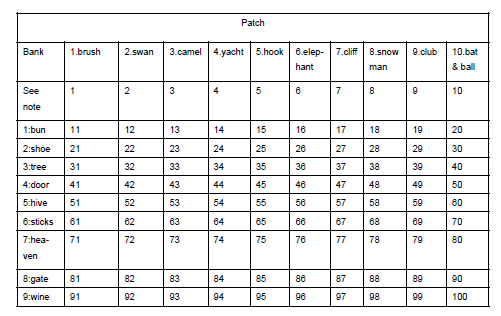 Note: for the first bank it is not necessary to have a number, as the first 10 will stand on their own. However if wished you could have NIL = HILL. If you decide that your Bank should be the shapes system, and the patch should be the rhyming system then use the following table. 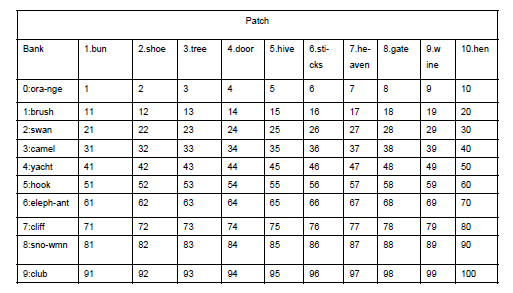 The way to use this system obviously is to introduce the object to be remembered into this new composite image. So if you wanted to remember a clock at number 86 (IN THE FIRST TABLE), then you would have an elephant stood to knock (movement and sound) on a gate, and on his back is a giant clock. The reason for needing the idea of a BANK and PATCH system is that an image is just that, an image. So when you DECODE the image you will need to know which came first. Otherwise, you would be asking yourself if your placement of the clock was at number 86, or 68.

This confusion would create an unstable memory image that might be forgotten. In fact, in this version number 68 is sticks and a snowman. Look now at the second table – what would the image be for a car at number 73? Work out which system you prefer and then stick to it!

How and why does it work?

We can retain separate images in our minds quite easily, and by using this kind of system of combining different elements the images remain quite distinct from one another. Because they are sequence based on a system we are already used to – that of counting – we are sure that we have not missed anything vital.

But there is one more thing which I will touch on now, but will be dealt with a little more later on, and that is the process of recall and long-term memory. The act of remembering creates the effect of strengthening the chemical bonds of a memory – or in the analogy of the stream, it widens it to a river. If you simply look again at the information to remind yourself then you are not actually remembering. There are optimum times for this process to be efficient, which will be covered later. But for now, it is worth realizing that using a systematic approach you will be able to recall far more information without the need to recourse to the quick glance to remind yourself if you have forgotten anything.

Such glances keep memories in the short term area of your mind, and true power memory is information which goes into long-term memory.

In fact the amazing thing is that once the memory has been firmly fixed in the mind, you will no longer need the system to recall the information as it will become part of your normal thinking, so do not be concerned that you are going to end up with 1000’s of elephants running around in your head because the systems covered here are simply a tool to help you 1) retain the information in the first place 2) get it into long-term memory.

What about erasing information?

Now that is the really clever bit. You can either let your mind lose the information over time (around 4 days!) or you can erase it ‘manually’. All you have to do is to go through the images without their attached items and you are ready to start over – a bit like erasing a tape recording or recordable cd which has just been re-formatted.

One last thing as we move on. Hopefully, you will be realizing that your memory is very impressive – in fact why not start impressing others now by doing a demonstration? It’s a strange feeling the first time you manage it because somewhere inside of you-you probably didn’t think that it would work without all the strain and effort that you used to, or still do, put in at school. In fact, because it is all just about remembering pictures you probably quite enjoyed it!

FACT: When Albert Einstein died they opened up his head to look at his brain – it was smaller than the average size! However, he used much more than most people. Doing memory stunts will enable you to retain larger amounts of information and genius is not so much about being clever, but seeing how one part of life fits with another part of life.

The more you know, the more you can link them together. So start thinking like a genius!